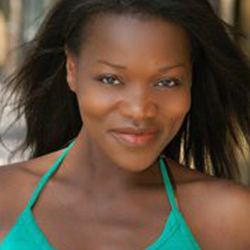 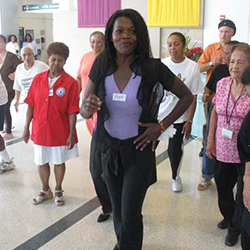 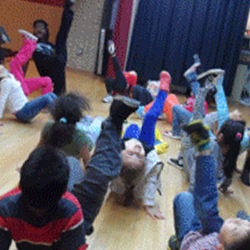 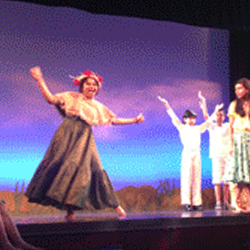 Angela Rostick, actress, dancer, zumba instructor, teaching artist is an active member of American Ensemble Theatre (AET) a New York based theatre company, established in 2001, where she has the privilege of working with a dedicated group of actors, directors, and stage crew. She is the representative of the company and is delighted to be in this position. Since its establishment, Angela has performed leading roles in: Eugene O'Neil's Anna Christie, "Before Breakfast"; Lynn Nottages "Poof" and a host of other plays. Most recently Angela performed and toured with Harlem Playwrights 21 in Tom Mitchelson's new play "B" where she embraced the role of Beatrice Halloway. Angela astounded audiences as Sarah Jane Lewis in "Queens of Heart", written and directed by Sabura Rashid, where she was nominated for an outstanding performance in a leading female role at the Audelco Awards. She won the Tiffany Award for best actress in a Gospel entitled "Church Fight." She also tap danced and sang in Flushing Town Hall's production of "George M" presented by Flushing Council on Culture and the Arts. She has toured with Awosting Dance Company and appeared in numerous showcases with American Dance and Drama. Angela has performed at Queens Theatre in the Park, National Black Theatre of Harlem, Henry Street Settlement, Producers Club, and Theater for the New City. She has also appeared on television, film and soap operas. In addition to her repertoire Angela has a background in Children's Theatre and Clowning through NY Goofs. She walks on stilts, face paints and design balloon animals. She also studied commercial and film at HB Studios. Angela tributes her theatrical and dance training to Fred Siretta and her theatrical professors at SUNY New Paltz where she earned her Bachelor Degree in Theatre Arts. She has also completed Special Education courses in a Masters program at Hunter College and through UFT at Fordham University. She taught in the classroom through the Department of Education in Districts 75 and 25. She trained with Education In Dance and the Related Arts and became a teaching artist under the supervision of Elizabeth Petit (Director). She later became a teaching artist for Flushing Council on Culture and the Arts and has been there since 2002.
As a teaching Artist, Angela has introduced creative and cultural dances to schools ranging from pre-K to Junior High School. Students are introduced to: a broad spectrum of music (classical, ethnic, jazz, hip hop) fine arts exploration, theatre games, positive self-esteem, and focus techniques. Her goal is to provide a culturally diverse educational dance program that is curriculum based and supports NYS Learning Standards in a safe and nurturing environment for students of all ages. Dance styles taught include: basic ballet, jazz, tap, hip hop, ballroom, line dance and zumba. Manipulates, visual aids and props are used for appropriate age groups and/or for children with special needs. In addition to dance Angela teaches drama with a focus on acting technique. She presently teaches at American Dance and Drama Studio and has implemented after-school drama clubs in public schools and parochial schools. She has directed adapted versions of classic plays such as "The Wizard of Oz", "Peter Pan", "The Little Mermaid", "Annie" and "The Emperor's New Clothes." Angela provides a fun energetic atmosphere that empowers students to learn.

Students will learn the basic elements of dance (time, energy, space) through improvisation and theatre games. They will Identify and execute loco-motor and non-loco-motor movements by use of pathways and be able to compare and contrast quick/slow movement through music and rhythm. They'll recognize levels (high, medium, low) and how we move our bodies to form shapes on these levels using round, straight, and curvy movements. Props will be introduced to increase their own creativity and cultural dances are introduced to expand their cultural knowledge.  Partnering and teamwork are essential to this program- it teaches students responsibility and respect. Students will build vocabulary, listening skills, and self expression through the dance program. The program will conclude with a stage performance. Students will understand that dance can improve their strength, flexibility, balance, coordination, memory, creativity, and lead to a healthy lifestyle. Can be adapted for all ages!

Students learn acting technique through improvisations, theatre games, relaxation, sensory exercises, objectives, and actions. Scene study and monologues are introduced while they learn basic technique and performance skills are enhanced as they develop stage presence.  The program will conclude with a performance of a monologue or scene from a contemporary or classic play.  For all ages!

Students learn basic theatre skills for performance (improvisation, theatre games, stage directions, stage presence, stage craft, rehearsals, auditions, teamwork, concentration, focus and self-control). They will experience the audition process and develop a sense of discipline and responsibility. A final production of a children"s classic will be performed at the end of the residency. For all ages!