“A master of vocal manipulation.” - The New York Times
“A local phenomenon.” - Time Out NY
“A stunningly versatile vocalist with a cunning imagination.” - The Los Angeles Times 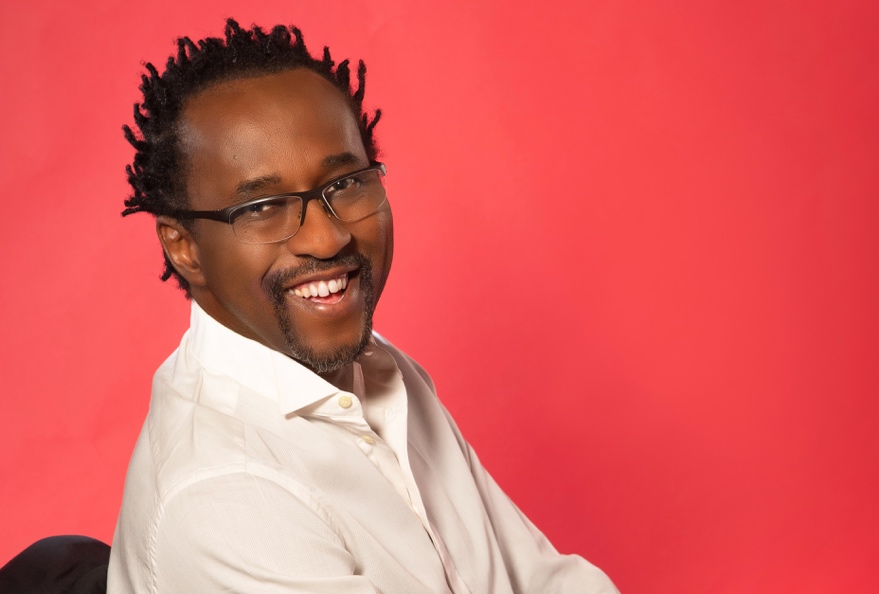 In honor of Flushing Town Hall’s 42nd anniversary and to ensure continued Covid safety, the venue is open at a limited capacity, offering 42 in-person tickets. The concert will also be livestreamed, and an unlimited number of virtual tickets are available for global music lovers to tune in from home — and from anywhere around the world.

“Flushing Town Hall’s mission is to present global arts to the global communities of Queens and New York City. Throughout the pandemic, the internet has given us the opportunity to reach a truly global audience,” says Executive & Artistic Director Ellen Kodadek. “We are so pleased to welcome the local community back into our Hall and to continue presenting wonderful artists to the world online!”

“It’s such a pleasure and an honor for me to perform at Flushing Town Hall with the greats Lonnie Plaxico and Marvin Sewell,” says Dr. Sitson of his trio members. “This project reflects my musical journey from Cameroon to the United States.”

Today a resident of Manhattan’s Upper East Side, Gino Sitson, PhD is originally from the Bamiléké region of Cameroon, Central Africa where he is descendent from a long line of family musicians known as Ntontas (“players of horns”). His mother is a singer and choir director. His daring musical project combines traditional African polyphonies, polyrhythms, and melodies with American jazz, gospel, and blues in a most innovative way, generating an exciting and multicultural, new sound.

Sitson’s extraordinary voice covers an impressive, four-octave range. He has recorded eight albums, including his most recent, “Echo Chamber,” which was preceded in 2016 by his entirely a’capella solo album of 16 songs, “Body & Voice.”

When not performing his own music, he can be heard on recordings with other artists and in various television and radio commercial jingles. He has even composed for the beloved Nickelodeon show, “Dora The Explorer.” In 2008, Sitson appeared with Bobby McFerrin in an “Instant Opera” project at Carnegie Hall and appears in the 2009 PBS documentary, “The Music Instinct: Science and Song,” along with McFerrin and Yo-Yo Ma.

Sitson is the winner of the 2004 Parents Choice Silver Medal Honor Award. Since 2006, he has served as a Cultural Arts Ambassador for the City of Miami, Florida and is currently also a UNICEF CAMEROON Goodwill Ambassador and Associate Researcher at IreMus (Institut de recherche en musicologie: Paris-Sorbonne, CNRS, BnF, Ministère de la culture).

For more information on The Gino Sitson Trio’s performance or to purchase tickets, visit:
https://www.flushingtownhall.org/gino-sitson

Flushing Town Hall recently launched its new membership program, Flushing Town Hall’s Circle of Friends, with memberships starting at gifts of $50 or more. With the loss of nearly all earned income, Flushing Town Hall is in dire need of support and is currently raising funds under its Lemon-AID the Arts Campaign. Donations in any amount are appreciated to support the artists and the nonprofit cultural organization as they continue to provide programming and entertainment across New York and the world.


Thank you to our generous community of donors for providing Flushing Town Hall a foundation of strength and endurance. We are grateful beyond measure for the elected officials, donors and members, foundations, corporations, volunteers, and all patrons who have supported us for over 40 years, in the best and the worst of times. Flushing Town Hall is grateful for all gifts received and wishes to thank everyone for their ongoing generosity.

With special thanks to the Howard Gilman Foundation, Flushing Town Hall was able to purchase equipment needed to live-stream and record from its theater.

We have done our best to recognize donations correctly, but should your recognition be incorrect, please contact Jessica Peña, Director of Development, at jpena@flushingtownhall.org.

About Flushing Town Hall
Flushing Town Hall (FTH), a Smithsonian affiliate, presents multi-disciplinary global arts that engage and educate the global communities of Queens and New York City, in order to foster mutual appreciation. As advocates of arts equity since 1979, we support local, immigrant, national, and international artists, developing partnerships and collaborations that enhance our efforts. As a member of New York City’s Cultural Institutions Group (CIG), we serve to restore, manage and program the historic 1862 landmark on behalf of the City of New York. FTH celebrates the history of Queens as the home of Jazz, by presenting the finest in Jazz performance. We are committed to arts education and hands-on learning, for the arts-curious, arts enthusiasts, and professional artists. We serve one of the most diverse communities in the world and strive to uphold the legacy of inclusiveness that has defined our community since the Flushing Remonstrance of 1657.

COVID-19:
Flushing Town Hall temporarily closed its physical venue during the COVID-19 pandemic in accordance with social distancing guidelines, presenting performances, exhibitions, panel discussions, and educational programs online through its virtual initiatives, FTH at Home! and Global Arts for Global Kids at Home. In 2021, Flushing Town Hall began its soft reopening, with artists and performers, staff, and in-person audiences invited to return at a limited capacity for select events, while it continues to offer virtual programs and live streaming.