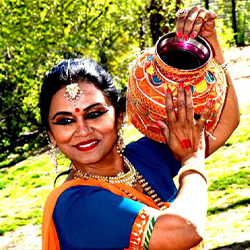 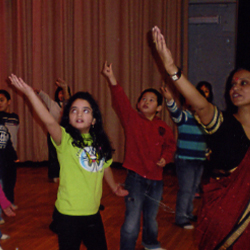 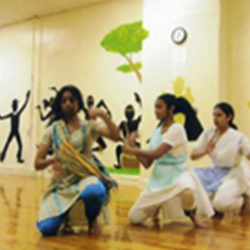 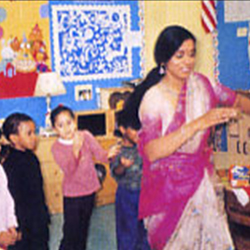 Abha Roy has conducted workshops and classes for New York City schools, universities, libraries and museums since 1992. Abha has blazed a trail of her own in the sphere of Kathak, a classic northern Indian dance form.   After completing her Masters in Geography, Abha started her career as a classical dancer in 1984, completing her diploma in Kathak under the guidance of late great Guru Kundan Lal Gangani.  She attained professional precision under the training of Pt. Durgalal when she completed her specialization in Kathak Kendra, New Delhi. Her original work includes the melding of her love for geography and Kathak by preparing the impressive and unique Indian map of "The Origin and History of Kathak Dance". She is credited with the creation of Aqua Kathak Dance for the Asia '82 Sports Festival hosted by the Government of India.  She represented the Indian Council of Cultural Relations and has taught and performed in South America, Guyana, Suriname, Trinidad and Tobago. She has also performed in Canada, Russia and many European countries.  She continues to enthrall art lovers with her great performances in NY at venues such as Lincoln Center, Flushing Town Hall, the Queens Museum, NYC Cultural Festival, Jamaica Arts Festival, the Jewish Center and many more.

Students will be introduced to Kathak, the classical dance of North India.  This dance is centuries old and is used to tell a story.  The dancers are actors who use spinning and posing to tell a story that originated in Hindu temples.  The diversity of India's culture and traditions is also demonstrated with a variety of Indian folk dances from the entire country.  In each session, students learn Indian dance steps with a focus on storytelling. For All Ages!

Yoga is a group of ancient spiritual practices originating in India.  Outside of India, yoga is mostly associated with the practice of asanas (postures) of Hatha Yoga or as a form of exercise although it has influenced all Indian religions and other spiritual practices throughout the world.  The goal of yoga can range from improving health and fitness to relieving suffering.  Abha will introduce students to yoga's basic postures and its cultural context. For All Ages!